Pluralistic designer Joey Ho believes that the core essence of design is to inspire and open up the possibilities of life. By actively involving himself in design projects, he has successfully established a rich, borderless archive of works of diverse specialties and sectors in different countries. This has also brought him countless awards and honours. Joey is a design partner of PAL Design Group, Chairman of the Hong Kong Interior Design Association, and Director of the Hong Kong Design Centre.

Before establishing Atelier E in 2009, Enoch Hui received his architectural training at the University of Bath and practiced architecture and interior design in both the UK and Hong Kong. In 2013, Enoch was recognised as one of Perspective’s “40 under 40”. He has been a guest critic for design institutes both at home and in the UK.

Tik Chan is the design director of Studio 93, which he founded in 2010. Throughout the years, Studio 93 has earned a lot of recognition, including the Asia Pacific Property Awards’ 5-Star Best Interior Design Private Residence (Hong Kong) and the A’ Design award from Milan, Italy. Tik is a certified interior designer of the Hong Kong Interior Design Association.

Max Lam’s works have a distinctive style that reflects the character and story of his clients and their visions. His team never settles for less and is always striving to explore and innovate. Max has won multiple awards, including Interior Design’s Best of Year Award (New York). In 2017, the Hong Kong Heritage Museum acquired his work Ripple for their permanent collection.

CM Jao believes that every design project, in exploring the possibilities of exclusive space, has its own unique characteristics. He values user experience and participation, and firmly believes that a satisfying work gives users a sense of arrival and connects people with the area in which they are situated.

Every year, hundreds of daredevils on Cheung Chau Island race up 14-metre-high conical bamboo towers covered in steamed buns to snatch the top bun. It is believed that these buns, each stamped in food colouring with the characters for safety and peace, bring blessings to those who are able to grab them. The annual spectacle has become so emblematic that the island’s festivities around the Tai Ping Purification Rites are generally known as the Cheung Chau Bun Festival. The towers are nicknamed “bun mountains”, or Bao Shan in Cantonese. The festival is an occasion to ask the deities to cast away disease and misfortune.

For this installation, architectural, interior, lighting and space designers from the Hong Kong Interior Design Association teamed up to encapsulate the spirit of the Bun Festival and explore how a celebrated heritage can be remade into something new. Composed of a more approachable set of rolling hills, and fitted with lighting fixtures and a fog machine, the 9,000-bun installation playfully reimagines the bun mountains as a metonymy of actual cultural artefacts found in Hong Kong. While bun-snatching over bun mountains is competitive and an adrenaline rush, the designers’ re-creation allows visitors to enjoy Bao Shan in an unorthodox but still meaningful manner. Everyone is invited to move around or sit down on the bun-covered installation to connect with this popular Hong Kong belief and appreciate the resilience represented by such an unusual work. 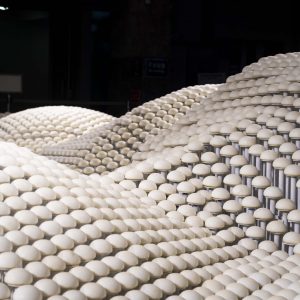 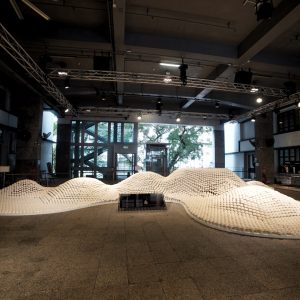