Julie & Jesse is an art/design studio established in Hong Kong and Jingdezhen in Jiangxi by designer Julie Progin and artist Jesse Mc Lin. Their practice straddles the fields of design, craft and art, using function as a pretext for visual discourse and ceramic experiments as a method.

Located in an upscale residential neighbourhood on Hong Kong Island, Haw Par Mansion and the adjoining Tiger Balm Garden were once a popular destination for Hongkongers to spend a weekend afternoon. While the mansion has been preserved as a historic landmark, the garden was redeveloped and has become a fragment of collective memory. Back in the day, Tiger Balm Garden was a wonderland where children played amid exotic statues, buildings and landscapes. Inspired by the artificial mountains and rock garden there, Hong Kong-based ceramics designer and artist duo Julie Progin and Jesse Mc Lin, better known as “Julie & Jesse”, have created a series of extraordinary Ottoman-like works that take the form of colourful Chinese ornamental rocks. By fitting the pieces with carpeting and wheels, the duo have also subverted the notion of Tiger Balm’s rock garden. These mobile chairs allow several people to sit together and lean against or hug the polished, colourful, sculpted clay-rocks, which are reminiscent of the artificial mountains once associated with the other-worldly surroundings at Haw Par Mansion.

Named Terra Mobiles, Julie & Jesse’s work engages the public in many ways. Visually, these eye-catching, approachable and unconventional pieces of furniture offer clues to the past. The duo also recycled yarn from Hong Kong’s Tai Ping Carpet factory, turning them into tufted, moss-like rugs that invite viewers to touch and feel the textures of the different materials. The wheels allow people to enjoy the open space at Haw Par Mansion and offer a personal and playful means to explore the relationship between cultural heritage and innovation.
(Special thanks to Design Trust Futures Studio 2019 and Tai Ping Carpet) 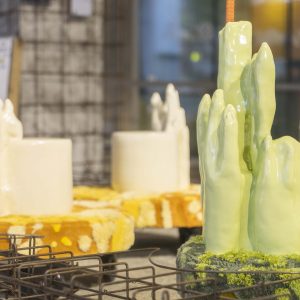